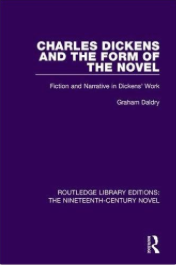 This is the original full introduction, omitted from the current printed edition

Charles Dickens is now almost universally accepted as a great writer. Recent criticism has compensated for any initial reluctance to treat his novels as serious works of art by discussing them in a bewildering variety of ways. What has nevertheless seemed consistently elusive is an approach to Dickens capable of telling us precisely why he is a great novelist. The repeated resort of criticism has been to apologise for what it has ultimately found to be missing, or present only sporadically, in Dickens’ novels, a sense of coherent purpose not undermined by what is seen as an archaic sentimentality. Such an approach has produced two dominant views; that Dickens is a great humourist, and that he is a great social critic.
Much perceptive criticism has been written about both of these parts of Dickens. Steven Marcus, John Carey, and J. R. Kincaid have all provided rich accounts of Dickens’ humour; while the ‘social’ imagery of the novels has been exhaustively documented, first of all by Humphrey House, to be followed by a plethora of critics giving us various versions of a ‘serious’ Dickens. A more recent production of this line of criticism is Schwarzbach’s impressive book on Dickens and the City.
What has remained the case, however, is that these two visions have been separated, often as a matter of strategy. J. R. Kincaid’s admirable discussion of the comic development of Dickens’ novels begins with what is effectively a disclaimer, as he tells us that “Instead of approaching the novels through imagery, structure, or theme, this is an attempt to approach them through humour”, so perpetrating the view that comedy and serious themes are alien and divided forces in Dickens’ novels. Only Robert Newsom, in his book, Dickens: on the Romantic Side of Familiar Things has provided any alternative to these readings, seeing Bleak House divided, in Dickens’ words, between ‘Romantic’ and ‘Familiar’, and telling us that:
Rather than simply merge the ‘romantic’ and the ‘familiar’ into some new synthesis,
Dickens sought to keep each quality intensely alive for his audience.